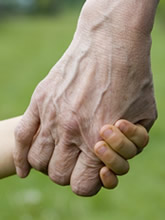 Dupuytren’s contracture is a hand deformity caused by the gradual shortening and thickening of the tissues within the palm of the hand and subsequent hyperplasticity of a node within the palmar aponeurosis. This causes the tendons of one or more fingers (usually the ring finger) to become increasingly difficult to extend, resulting in a perpetually “curled up” finger.

The biological changes within the affected tissue are akin to disorders such as plantar fasciitis in the foot and Peyronie’s disease in the penis. The fibrosis within the palmar aponeurosis continues to worsen the condition despite the initial pain fading away, and ultimately condenses itself into the iconic “cord” adjacent to or surrounding the actual tendon. The contracture develops much more slowly in women than in men and occurs frequently after age 40.

Although the underlying biological cause of Dupuytren’s contracture is currently unknown, it has been observed to be more prevalent in persons with diabetes mellitus, epilepsy, and alcoholism. However, scientific data has yet to verify these claims. Genetic predisposition to Dupuytren’s contracture has been supported by statistical analysis and it is currently believed that individuals with a close family member suffering the disease have between a 60-70% chance of developing it themselves.

Treatment for Dupuytren’s is not always advised, due to the relative benevolence of the symptoms. In some cases, the condition may improve on its own.

Otherwise, more invasive maneuvers such as needle aponeurotomy or microsurgery (fasciectomy), which weaken or remove the rigid tissue that has built up over time, may be performed. These solutions do run several risks which should be discussed with your doctor first, such as redevelopment of the disease, thickening of unaffected fascia post operation, or damage to nerves in close proximity to the affected area.

If you would like more information about Dupuytren’s Disease & Contracture, or to schedule an appointment, feel free to fill out our convenient contact form or call us directly at (262) 656-8237.